Ruskeal'skie or, as they are also called, Tohminskie Waterfalls are a cascade of small plain waterfalls near the village of Ruskeala, which is on the Tohmajoki River. The largest of the waterfalls, Ahvenkoski, reaches the height of four meters. If you go with a tour of the famous Ruskeala Marble Canyon, you'll have to stop by them on the way. Amateurs of travelling by themselves will also find them easily: the waterfalls are viewed from the road.

What attracts tourists to these places? the fact that there was filmed the scene from the movie "A dawn here is quiet", the one where Zhenya died. And more recently, in 2010, waterfalls were used as a "decoration" for another film, The Dark World, after which the small cottage was left on top of one of the waterfalls.

Fans of extreme sports also do not skip waterfalls: during the spring-summer season they are kayaking.

There is organized parking. There are also wooden recreational and souvenir shops.

The store offers a traditional set of souvenirs — magnets with Karelian views, jewelleries from a Karelian birch and shungite, talismans and much more. On the opposite side, local residents offer tourists jam of seasonal berries. 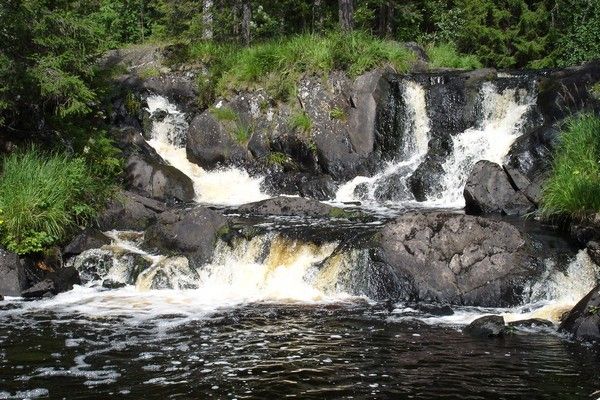